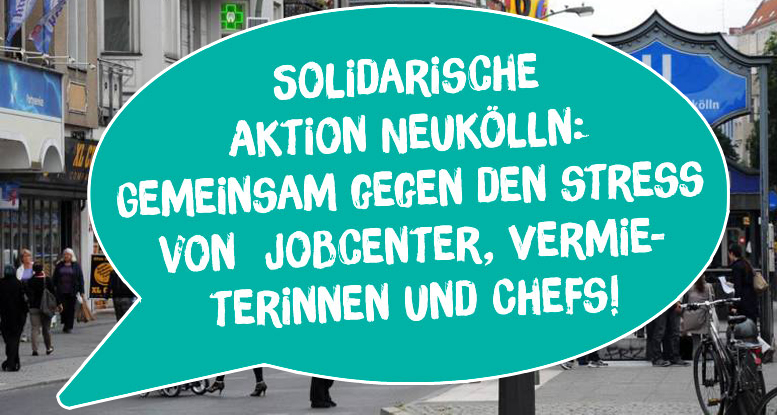 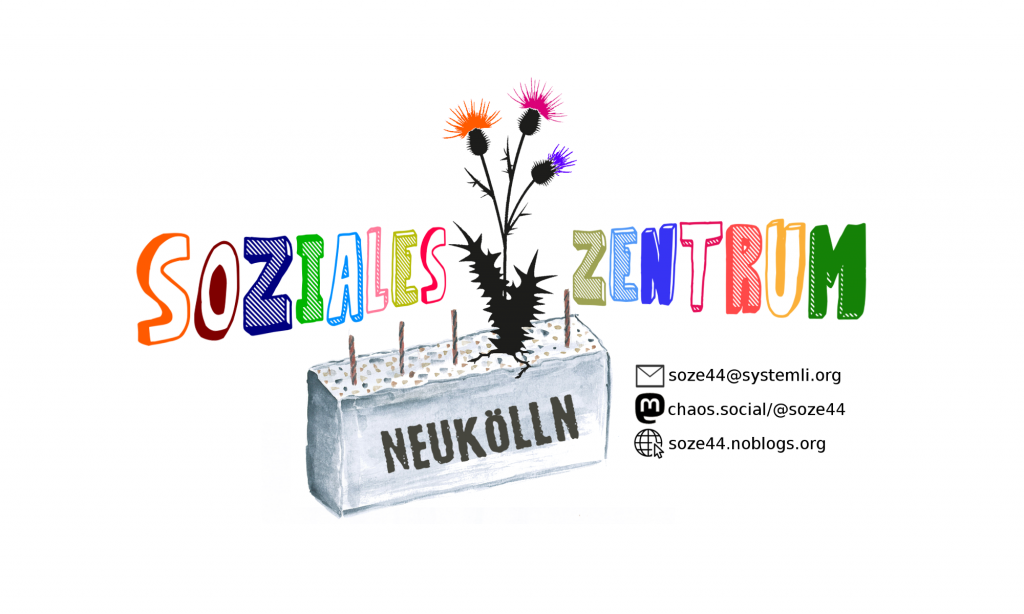 The Kiezladen Friedel54 is a self-organized, social center in the north of Neukölln. Kiezladen means a room to get to know each other, to relax, to educate oneself and to experiment. Concretely that means public soup kitchen, events and workshops, movies and documentaries, bar and cocktail nights, brunches and cafés, as well as football table, freebox and a screen print workshop. All happens in a vibe that preferably doesn’t exclude anyone and in a noncommercial and self-organized setting.

As of Monday the 22nd of June 2017, it’s been made official: After over 13 years of community-oriented political, cultural, and non-commercial activities in North Neukölln, on the 29th of June at 9am a court official plans to violently enter our beautiful community center. According to the notice, any possible resistance to the official’s entry will be broken with the help of the police. It remains unclear if they’re so blind, that they missed the fact that Fusion isn’t on this year, or if they’re just in the mood for a bit of practice before the big circus in Hamburg.

Even today, the tax-evading real estate shark Pinehill S.a.r.l still believes that it makes economic sense to evict the community center on Friedelstraße 54. While the investors anonymously hide behind multiple
legal constructs, the politics and cops once again are not quite stupid enough to get their hands dirty with the issue. Rather, they have gathered their forces behind a Luxemburg based shell company, which knowingly bought in to this conflict. This was a conscious political decision!

We will not let this happen! The buildings belong to us! Each forced eviction is one too many!

Because of this we are going to become more active in the coming weeks to increase the pressure. We will gladly come talk at every Kitchen for Everyone/People’s Kitchen, demo, and rally to discuss the situation. We appreciate any possible support and/or actions! Make the city your playground and become cre-active! From now on, every day is action day! For the preservation of the community center, for every self-determined coexistence, and for each step towards a grassroots city!

In the context of the arising problems, we have organized an anti-repression structure.

For Day X, specifically the 29th of June, we are naturally calling for blockades and actions! These could take place in front of the shop, in the path of the cops, and anywhere, where they least expect it. Let’s
shake up the daily lunacy! Let’s be incalculable, let’s be furious, let’s be victorious!

Dates
A few more will be added to the list, but the following dates are
already confirmed:

If you don’t live in Berlin, but want to come to the events and to Day X?
Places to sleep can be arranged, just contact: f54_reisebuero@riseup.net

The neighborhood space Friedel54 got a notice of termination

Thursday the 29th of October 2015 a bailiff delivered a notice of termination, effective the 30th of Apil 2016, to the neighborhood space F54. With this step the Vienna based owner “Citec Immo Invest GmbH” climbes the ladder of escalation in the dispute with tenants and users of the house. Similar things are happening all around Berlin, amongst them other Citec owned houses. Occurrences like these seem to be part of everyday life in Berlin now. But more and more people are fed up with the attacs on their living space – one of the basic human needs. They are fed up with having to put up with the fact that because of abstract ownerships, companies and rich people can decide where and how they can live.

We invite all neighbors; concerned, angry, solidary people and groups to break through this state of being.

Kiezladen Friedel54: Last round – rising up to the challenge of our rival

The social center Friedel54 has received his action for eviction. After a long fight against the displacement by the „CITEC Immo Invest GmbH“ they sold the house to the „Pinehill S.à.r.l.“ with main office in Luxembourg at the end of June. The house community tried unsuccessfully to buy the house with support of the so-called “Mietshäusersyndikat” (syndicate of renting houses), an association that helps in buying property to take it out of the real estate market. Thus, Pinehill bought the house in the knowledge of the Friedel conflict and immediately brought an action for eviction. The lawsuite is effectively the first contact from Luxembourg, as the new owner hasn’t informed anyone of the selling of the house yet. The house community of Friedel54 was under threat of massive rent increases because of the modernisation plans by the old owner. Thanks to the fight of the last months it was possible to stop this, at least partially. Until now.

Therefore, the new owner’s action isn’t merely a challenge to the social center but rather to the house community. At the same time it mirrors the capitalist urban politics. Everything that does not bring maximum return gets displaced. In this logic people with low income and uncommercial spaces are worth nothing.

We still ask ourselves: Who is this “property”?

Since april we receive strange letters with the invitation to “return” the spaces. But why should we give “back” our spaces and to whom? We are those who spread life, love and solidarity in these spaces for more than 12 years! We won’t accept any property right that is based on the interests of a dubious real estate company which only exists since a few months and which is financed by shady sources of capital and wants to displace us with violence. These spaces belong to us and we won’t “return” them! Instead we want more:More solidarity in the neighborhood – more rebellious neighbourhoods – more city from below

In a world where a growing part of our wage is destined for the rent, it is even more important that people struggle against exploitation and other forms of domination. Friedel54 is a place where these people come together and practice resistance. Many other social spaces are standing in a similar situation and are affected by systematic displacement and state repression. We were, we are and we will remain in solidarity with you and with all the others who are threatened by displacement. You are not alone! Because: Solidarity is practical!

The lawsuite is new and we are consulting with our lawyer. Soon we will have a more detailed idea of how much time remains and how we can use it. Be ready and keep your eyes open. We explicitly welcome any kind of solidarity. The bell sounds for the last round and it is up to us to decide who will win.

Don’t lose your grip on the dreams of the past. You must fight just to keep them alive

Single events, regular appointments, groupmeetings, workshops, freebox and every other usage which comes to your mind.

Personally:
Project meeting every 3rd monday a month , at 20:00